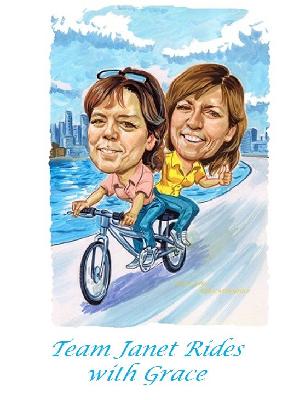 Less than 2 weeks to 2019 Hub on Wheels ride day!!! I will join family and friends and ride on Sunday, September 15th in remembrance of my sisters Janet Cameron and Grace Daigle. September 16th would have been Janet's 60th Birthday. Help me celebrate Janet's 60th, with a small donation to Children's Hospital to fight pediatric cancer. WE BELIEVE that every dollar we raise for Boston Children's Hospital will have a ripple effect and could be THE dollar that changes everything for a future family in crisis.

I've signed on to be a Hope Rider for the Hub On Wheels citywide bike ride because I believe so strongly in all the amazing things Boston Children's Hospital does for kids. On September 15th, I’ll join thousands of cyclists for this family friendly ride through the Boston neighborhoods – including on a car-free Storrow Drive – all to raise critical funds for pediatric cancer research at Boston Children’s.

From the birth of modern chemotherapy to the discovery that tumors need their own blood vessels to grow, Boston Children’s Hospital researchers don’t just improve cancer treatment—they introduce new chapters in cancer medicine. Fundraising plays an instrumental role in keeping scientists moving forward and 100% of your donation goes to directly to helping kids.

A donation of any amount has a profound impact. Thank you for your support.

Sign up to be notified when you can register
to join the Hope Riders at the City of Boston’s
Hub on Wheels citywide bike ride!