The 2020 Boston Marathon has been changed to a virtual event due to ongoing COVID-19 concerns. The event will take place over the course of the second week of September. More information coming soon. We encourage you to continue fundraising, as families and children need us now more than ever. Read the full BAA statement here. 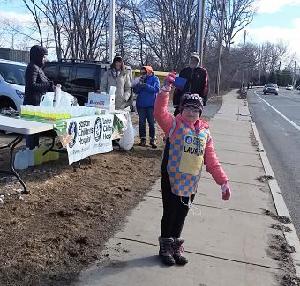 "If you're not smiling, you're doing it wrong" Isabel's favorite quote

My dream for so long was to have the opportunity to run the Boston Marathon for a charity. Little did I know someday that dream would come true for a charity that has supported and will continue to support my own daughter throughout her lifetime.

I've joined the Miles for Miracles team because I have firsthand experienced with my family all the amazing things Boston Children's Hospital does for kids. They have saved my daughter’s life in all aspects, and have supported our family through our journey with them. They have not only supported our family, they have become our family.

I have chosen this foundation and event for ALL children in need of Boston Children’s whether it is for a one time crisis, general care or to those who will need a lifetime of support by them. Each team member of my team is paired with a Boston Children’s selected patient as their Patient Partner. I am honoring my daughter Isabel along with two patients I asked to be paired with.

Isabel is going on her 3rd year as a Patient Partner with this program, a program that has given back so graciously to her and so many kids. Miles for Miracles team members raise funds for Boston Children’s Hospital’s greatest needs. The foundation uses 100% of its donations to go back into the hospital. Examples such as: patient care; medical research; recruitment and training; medical staff new hires; and community health programs.

I didn’t want to stop just at honoring Isabel. For all the positivity the overall program has given to Isabel through the years, I also wanted to give those same positive experiences back other families. So I asked to take on two other patients whose families made a special mark in my heart. Rian and Nora!

Please take a few moments to read each story below:

Isabel has been a patient at Boston Children’s for over a decade. She will continue to be followed by Children’s throughout her adult life as well. Isabel has been seen by over 13 different specialty teams over the years. Our family has not just developed relationships with these teams medically, but as a second family unit.

Isabel is considered a frequent flyer to BCH. She lives with Noonan Syndrome, a rare genetic condition that can medically affect all aspects of the major systems of the body, developmental delays, learning issues and short stature just to name a few. Isabel also lives with Epilepsy caused by a brain malformation in utero, along with severe GI motility issues which have recently resulted in needing an Illeostomy bag. She has had endless medical issues and complications through the years.  We have been those parents at the bedside who weren't sure if we would be walking away from BCH without her. And also the parents who walk out of any given clinic know she will be ok. Thankfully due to her amazing teams at Children’s she lives with bouts of healthy times in between, but will face more surgeries and newly developed medical needs throughout her lifetime as well. But in the mean time, she LIVES, she LOVES, and she LOVES TO LIVE her life to the fullest!

Rian was given a pre-natal diagnosis of Down Syndrome early into the pregnancy in which congenital heart defects run high risk. The family was given a referral to see a cardiologist for an Echocardiogram to determine if there was any present. He was diagnosed with a Complete AV Canal Defect.

Rian was watched carefully throughout the remainder of the pregnancy and was born 5 days early on January 5, 2017 with no complications. He was immediately taken to the NICU at UMass Memorial for observations. After a few days and an echocardiogram, it was determined that Rian could be released to the maternity unit for his final night stay in the hospital.

Rian was scheduled at BCH for open-heart surgery on April 7, 2017. He was 3 months and 2 days old. He was scheduled for his pre-op testing the day before. Rian was to have a sedated echocardiogram and he was to spend the night for observation. They arrived at Boston Children’s Hospital on the morning of April 6th and met with his cardiologist, Dr. Breitbart. However, Rian had a low grade fever when we arrived. There was talk of postponing his surgery; however, the doctors there knew too it had to be done now.

They continued with the pre-op testing throughout the day. His surgery was thoroughly explained to the family, and they were able to meet his surgeon, Dr. Quinonez.

Handing Rian off to the hospital staff was the hardest thing his parents have ever done. The next 8 hours, he was in the hands of Dr. Quinonez. At some point in the afternoon, they saw Dr. Quinonez walking toward them with a smile. Rian’s surgery had been a complete success and Rian did wonderful. They thanked Dr. Quinonez for saving Rian’s life. They are forever grateful to him.

Rian spent two nights in the ICU and was then transferred to the cardiac unit. He did better each day and the only reason he stayed longer was because of a respiratory cold that he had down with. Including his night from the pre-op testing, Rian only stayed in the hospital for 8 nights.

From the moment the Wood family walked in the doors at BCH, to the day Rian was discharged, they had our every need met by the staff at BCH. All of their questions were answered and Rian received the best care he could have possibly have gotten. They feel really lucky to have been so close to such great medical care.

For the months after Rian’s surgery, his cardiologist continually monitored him. Unfortunately, his surgery did not fix his nighttime breathing issues. It turned out that Rian had severe sleep apnea. He continued with nightly oxygen for the next two and a half years. After having adenoids and tonsils removed, Rian finally outgrew his apnea in the July, 2019.

During Rian’s recovery from his surgery, he kept getting pustules on his incision. At one point, almost 2 months after his surgery, along with having a cold, it appeared that his incision was infected. The family brought him to the UMASS emergency room. They contacted Boston Children’s for a course of action. It was decided that Rian would be brought to Boston, via ambulance. The family arrived in Boston in the middle of the night, eventually given a single room, due to Rian’s possible infection. Dr. Breitbart oversaw Rian’s care. Again, everyone was simply amazing. Rian did have a virus and whatever type of virus he had, infected his incision. Rian received the best care and was discharged a few days later.

Today, Rian is a 3-year-old little boy whose life was saved by the doctors at Boston Children’s Hospital. Rian’s only hospital stays since then has been for observations after two surgeries. He began thriving almost immediately after his heart surgery and has never looked back. He is a little superman.

Over the last year, a local Mom, who happened to be Isabel’s old dance teacher from years back, reached out to talk. She had never stopped following Isabel’s Story on-line and felt compelled to reach out. Her middle daughter Nora had endured medical issues since birth, along with some developmental concerns so they were sent to Boston Children’s. Nora coincidentally was thought to have Noonan Syndrome. But after further research and genetic testing, Nora was found to have an extremely rare syndrome called Baraitser Winter Syndrome. Nora is one of only 50 diagnosed cases in the world, and two others are seen at BCH. Her care has been superb at BCH with the best team of physicians you could imagine. Luckily for Nora, she seems to be writing her own chapter of what to expect with this syndrome, as she has beaten the odds already.

I will need to meet my fundraising goals through personal donations from family, friends, community and co-workers. My minimum goal is set at $12,000, with an endless wish after that.

Support my family and other families like ours by supporting the hospital! Please make a gift today. 100% of the Trust donations goes right back into the hospital through patient care and family support.

-The hospital's patient care programs are unusually sensitive to what sick and injured children and their families really need.
-Researchers regularly make amazing discoveries that change children's lives.
-Boston Children's welcomes kids whose families can't afford health care--more than any other hospital in Massachusetts.
-Community programs makes a point of reaching out to help low-income and at-risk kids.
-The hospital doesn't just stop there. Boston Children's really understands the importance of training the next generation of top pediatricians and nurses, so they can continue to provide the best, most innovative care possible to our kids.

We have a lot of family fun fundraisers in the plans from now through April so stay tuned! And let's not forget to keep a lookout for Isabel's Back Yard Bake Sale in April!

Learn how you can apply to run the 2020 Boston Marathon or another race with Miles for Miracles!

Sign up for email notifications or apply for another team.