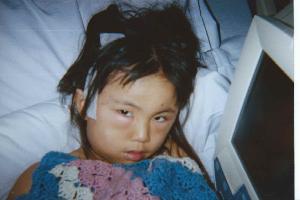 A photograph taken during post-op

Moyamoya, which means "puff of smoke" in Japanese, is a rare vascular degenerative brain disease. Moyamoya causes arteries within the brain to constrict and obstruct blood flow through constriction and blood clots (thrombosis). In order to compensate, a collateral circulation develops around these blocked vessels, but these collateral vessels are small, fragile, and prone to bleeding, aneurysm, and thrombosis. Without treatment Moyamoya can lead to permanent mental disability and even death.
Luckily, doctors were able to diagnose me with Moyamoya in May of 2007. By June of 2007 I was able to undergo pial synangiosis, or revascularization of the brain, by the doctor who pioneered the technique. Since 2007 I have made several trips to Boston to see Dr. R. Michael Scott and now his successor Dr. Smith to ensure my continued health.
However, as I have grown older I have wanted to give back to those who have given me so much. That is why I decided to start a fundraiser for the Moyamoya Research Fund. I want to help those who are, and who will be diagnosed with this disease by funding further research.