Thank you for participating in the 2020 Virtual Walk. We look forward to seeing you in 2021! 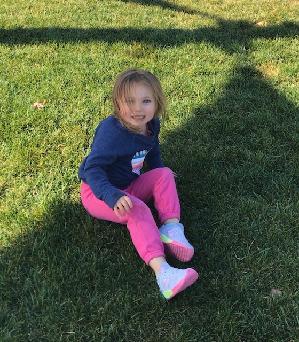 Thank you for visiting our page in support of Team Lexie!

THANK YOU to our family and friends for their donations and support these past few years. Since our inaugural walk in 2017, we’ve raised over $17,000 for BCH! We had our biggest team last year ~40 walkers and are now gearing up for our 4th year to support the Boston Children's Hospital Eversource Walk for Kids in honor of our daughter, Lexie (age 4.5).

Lexie has congenital heart disease. In the last four years, she’s undergone 8 cardiac catheterizations and had open heart surgery when she was just 14 months old. We have supported this walk each year to thank BCH for the care they’ve provided to Lexie and other kids like her. We aim to beat our fundraising efforts again this year with a Team goal of $10,000! Scroll on to read Lexie’s story with CHD and help us raise funds by donating today!

Lexie’s pediatrician detected a suspicious heart murmur at a routine visit when she was 3-weeks old. We were referred to and saw a local Cardiologist a few weeks later. Lexie was completely thriving and otherwise "healthy" so we were sent home without much concern, except to follow-up in 4 months when Lexie was 6 months old.

That started our journey to cardiologists and tests such as EKGs, ECHOs, Chest CTs and Lung Scans. She eventually had a Diagnostic Cardiac Cath performed at BCH on July 13, 2016, when she was almost 10 months old, to determine her diagnosis: PAPVR (Partial Anomolous Pulmonary Venous Return) and PAS (Pulmonary Artery Stenosis).

A BCH multidisciplinary team met afterwards to review Lexie's case and discuss her path of care. It was decided that she should first undergo open heart surgery to fix the PAPVR, a structural issue where 2 of her pulmonary veins were misplaced. In her case, all 4 pulmonary veins were dumping into the right side of the heart creating extra blood flow requiring that side of the heart to work harder. It was also insufficient in supporting the oxygenation to the lungs. While it's an important diagnosis, it's not usually an issue that requires urgent fixing and she was also asymptomatic. However, she also had extensive PAS where her pulmonary arteries, including many distally located, were stenosed (narrowed) and insufficiently allowing blood to flow through to the lungs. The medical team decided to fix the PAPVR first to normalize the blood flow to see if that may better improve the PAS.

Lexie underwent open heart surgery on October 14 2016. Dr. Chris Baird at BCH was her surgeon and an expert on congenital heart valve issues. Those were the longest few hours of our lives, including the 45 minutes where they had to stop her heart and put her on the heart-lung machine. The surgery was a success (!) and we were sent off to the BCH ICU. That was also one of the longest nights of our lives. The nurses were amazing at keeping her comfortable through heavy sedation medication, but then the time came to extubate which creates discomfort. Lexie was only 14 months old and had just started walking and learning words. She got "mommy" and "ow" down during her stay and even began singing "Twinkle Twinkle Little Star" with me. She recovered really well and after a few days we were able to take walks around the ICU floor and then eventually moved to the inpatient floors where she could walk her way down to the Cardiac 8East activity room (while still hooked up to the drip lines) and play with all the toys other people had donated to the hospital. We were discharged a week later, on October 19th and sent home without many restrictions, except for having to scoop when picking her up, to limit any tear on her sternum. We were given time to recover and had check-ins with her local cardiologist. Just a few months later she was scheduled for another Cardiac Cath to check the status of her PAS and likely do an intervention.

Fast forward to today, 3 years since her open heart surgery, Lexie has had 7 interventional cardiac catheterizations where they had to balloon dilate her pulmonary arteries, including the placement of 3 stents into both her left and right main pulmonary arteries where the balloon dilations just weren't enough. Each time involved 3 days in the hospital, including the pre-op rodeo, the day of the procedure where we'd stay one night and then discharge the following day. All along, through the needle-poking, boo-boos, and sleepless nights, Lexie has been an inspiration to us and anyone who knows Lexie. She truly is our hero.

Today, Lexie's pulmonary pressures are considered to be at a "safe" number, whereas she was previously a high-risk patient with pulmonary artery pressures double what they should be. We've been very fortunate these last 3 years to have the best medical teams at BCH care for Lexie to get her to this point. At her last hospitalization, we heard the news we’ve been waiting for – we can wait a FEW years before her next procedure! It’s almost hard to imagine she’ll be a 2nd grader (her older sister’s current age). We’re excited for this news and in the meantime will continue to have twice yearly check-ups with our local cardiologist.

Thank you for reading Lexie's story and considering to support us as we walk to support BCH and the exceptional care they provide to kids and families across the world. We know that money raised will help fund Boston Children's exceptional care and groundbreaking research that can help every child.

If you're interested in joining our team, just register within this page.

Sign up to receive updates about the Eversource Walk for Boston Children's Hospital in 2020.