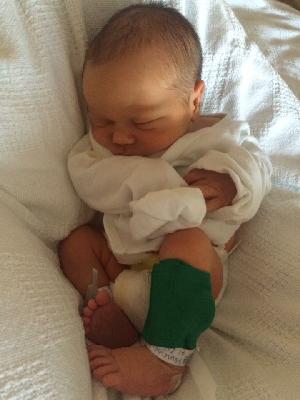 On December 3rd I am running a 5k in Portland, ME called the Santa Hustle and dedicating my run to #ambroseangels.

I am hosting a fundraiser, in memory of the beautiful angel Ambrose Valentino Mancuso who passed away last year. The funds will go directly to the Robert's Program at Boston Children's Hospital. Please consider donating to further SIDS research and help families who lost their precious babies

Robert’s Program is a service offered to families in Massachusetts who have lost a child under the age of three years suddenly and unexpectedly.

Based at Boston Children's Hospital, our program brings together teams of the top doctors in their fields to apply new technologies and discoveries to every family whose child has succumbed suddenly and unexpectedly.

Our far-reaching program involves clinicians and scientists from the fields of:

We work collaboratively with

To provide comprehensive clinical care to families that have suffered the sudden and unexpected death of a child under the age of three due to natural causes, including:
•the review of autopsy information and providing and independent diagnostic opinion
•potential recommendations for additional testing
genetic counseling
•assessment of risk to siblings or future children
bereavement support.